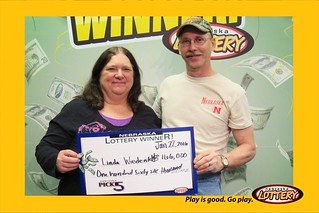 While claiming her prize on January 22, Wiedenfeld told Nebraska Lottery officials that word about the jackpot-winning ticket sold at Fast Mart reached her shortly after the drawing. “Everyone knew I bought my tickets there,” she said. It wasn’t long before she realized she had won the $166,000 jackpot. Wiedenfeld plans to complete some home improvements using her winnings.