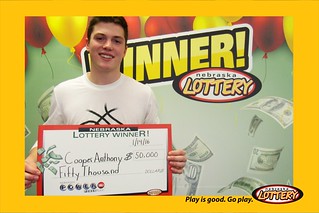 While claiming his prize on Jan. 14, Anthony told Nebraska Lottery officials that, since he’s a sophomore at Nebraska Wesleyan University, much of the prize will go towards his education.

“I’ll use some of it for something fun though,” he said.

Anthony said he had never purchased a lottery ticket before. He was motivated to purchase a ticket by the world-record $1.5 billion Powerball jackpot.