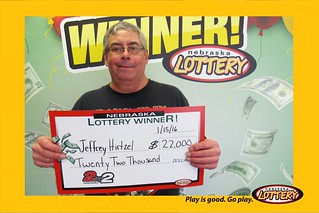 Jeffrey Hirtzel of Lincoln won $22,000 playing 2by2 from the Nebraska Lottery.

While claiming his prize on Jan. 15, Hirtzel told Nebraska Lottery officials that he purchases all his tickets at Super C, including Powerball, Nebraska Pick 5 and MyDay.

This is Hirtzel’s second time winning the top prize in 2by2. He said he started playing 2by2 about a year ago after receiving a coupon for the game. He soon won $100 and $22,000 shortly afterwards.

He said that he’s the only regular player at that Super C who buys 2by2.

“They were all really excited at the store,” he said. “They knew it was me right away.”