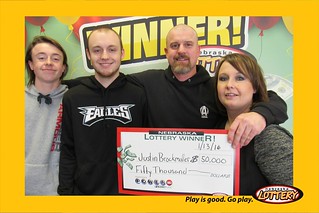 Justin Brockmoller of North Platte won a total of $50,004 playing Nebraska Powerball for the drawing on Saturday, Jan. 9.

Brockmoller purchased his winning ticket at Kwik Stop, 120 S Jeffers Street in North Platte. The five-play quick pick ticket contained one play with four of the five winning white ball numbers (16, 19, 32, 34, 57) and the Powerball number (13) from the Jan. 9 drawing for $50,000.

While claiming his prize on Jan. 13, Brockmoller told Nebraska Lottery officials that he plays Powerball when the jackpot is high. At the time of his purchase, the Powerball jackpot was at a record $900 million.