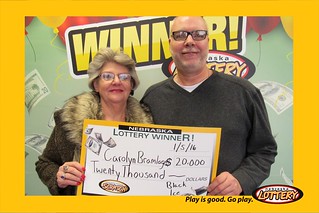 Bramlage purchased her winning ticket at Bucky’s, 13736 Q Street in Omaha. Scratching the ticket, she revealed matching numbers for a corresponding prize of $20,000.

Bramlage is no stranger to winning on Scratch games, having won $5,000 playing the $1 game Get In Line back in September 2015. While claiming her latest prize on Jan. 5, Bramlage told Nebraska Lottery officials that she bought the ticket early in the morning while her husband slept.

“I had to wake him up because I was so excited,” she said. “He just looked at it and said, ‘Yep,’ and fell right back asleep. I couldn’t believe it.”