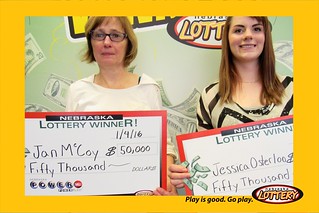 While claiming the prize on Jan. 4, Osterloo told Nebraska Lottery officials that she checks the Nebraska Lottery terminal every morning when she arrives at work. On Thursday morning, the terminal notified her that Black Bart’s had sold a winner. Both women said they were slow to believe it could be their ticket.

“You don’t really think it could be your ticket, but you check it just in case,” Osterloo said.

“There was a bit of celebration, but we tried to keep it civil,” said McCoy.