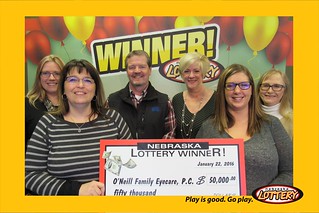 For the drawing on Wednesday, Jan. 13, the group purchased their winning ticket at Gokie’s Fast Mart, 202 E Douglas in O’Neill.

While claiming their prize on Jan. 22, the group told Nebraska Lottery officials they have bought Powerball tickets together three other times during high jackpot periods. The drawing for which they won had a record jackpot of $1.5 billion.

“We were shocked. We had a mass texting party that night that lasted a few hours,” said Sue Seger. The group members said they’ll use their share of the winnings for everything from braces to house painting to a service trip to New Orleans.