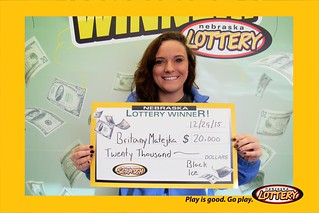 Matejka purchased her winning ticket at Mega Saver, 8540 Blondo Street in Omaha. Scratching the ticket, she matched her numbers to the winning numbers to win $20,000

While claiming her prize on Dec. 29, Matejka told Nebraska Lottery officials that she rarely plays Lottery games and she bought her ticket on an impulse.

“At first I thought it was just $1,000, and I was shocked,” Matejka said. She said she showed the ticket to her mother, and her mother was even more excited than she was. Matejka said her mother held onto the ticket for her through the holiday weekend until she could claim the prize in Lincoln.

Matejka said she’ll use her winnings to pay off her car.