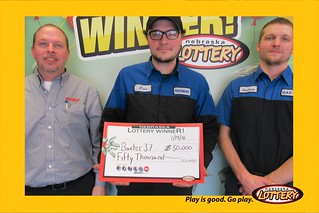 A group of 37 employees at Baxter Auto in La Vista won $50,000 playing Powerball from the Nebraska Lottery.

While claiming the prize on Jan. 14, members of the group told Nebraska Lottery officials they began buying tickets together just three drawings ago, when the Powerball jackpot began reaching record levels.  All of their tickets were purchased at Pump & Pantry, 6912 South 100th Street in La Vista. One ticket matched four of the winning white ball numbers (4, 8, 19, 27, 34) and the Powerball number (10) for $50,000.

Wednesday’s Powerball drawing was for a $1.5 billion jackpot, a world lottery record. There were three jackpot winners, one in Florida, Tennessee and California. The drawing produced five $50,000 winners in Nebraska, including the Baxter 37, and winners in Lincoln, Omaha, O’Neill and Scottsbluff.

Eric Brewer of Council Bluffs, Iowa, said when the group began pooling their money to buy tickets, each member provided $5. For last night’s drawing, they increased the buy-in to $10.

“There’s not much work getting done around the shop today,” Brewer said in reference to the air of excitement.

Brewer said when he called one of his coworkers after the drawing last night, his coworker didn’t believe him.