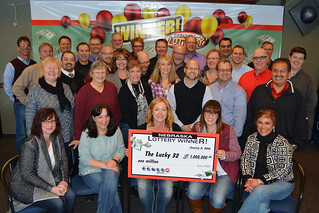 A group of 32 coworkers has won $1 million playing Powerball from the Nebraska Lottery.

For the past 10 years, the group, who are referring to themselves as “The Lucky 32” has purchased lottery tickets whenever the Powerball jackpot is $100 million or higher. In the Jan. 6 Powerball drawing, the group purchased five plays on a quick pick ticket at Fat Dog’s, 3100 NW 12th Street in Lincoln. One of those plays matched five white ball numbers (02, 11, 47, 62, 63) to the five drawn on Jan. 6, which is worth $1 million.

The 32 players joined millions of other players around the country as the Powerball jackpot swelled to $500 million for the drawing. For Saturday’s drawing, the jackpot is $800 million, the highest lottery jackpot in United States history.

Nebraska Lottery officials met with The Lucky 32 on Friday at Haymarket Park in Lincoln. Members of the group had several plans for their $31,250 share of the prize, including trips, vacations, paying bills and donations to charity. This is the 15th $1 million Powerball prize won in Nebraska since the game launched in-state in 1994.

Powerball is a multi-state jackpot game currently offered by 44 state lotteries, the District of Columbia, Puerto Rico and U.S. Virgin Islands. The odds of winning $1 million playing Powerball are 1 in 11,688,053, while the overall odds of winning any prize are 1 in 24.9.