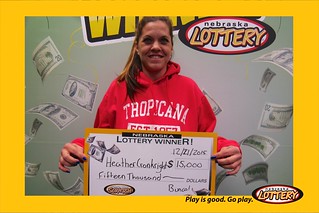 Cronkright’s boyfriend purchased the winning ticket at U-Stop, 660 North 84th Street in Lincoln. Scratching the ticket, she revealed matching dice symbols in each of the 10 ROLLS on the ticket for $300 each. Another matching dice symbol was revealed in the 5X BUNCO! NUMBER space, which multiplied each ROLL prize five times for a total of $15,000.

While claiming her prize on Dec. 21, Conkright told Nebraska Lottery officials that her boyfriend purchased the ticket and gave it to her as a gift. At first, she didn’t realize that she had won the top prize. “I thought it was a joke at first and I was so mad,” Cronkright said. The couple recently moved from Las Vegas to Waverly, and the prize money will help the family get settled and buy Christmas presents.