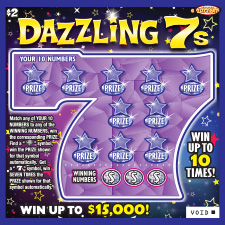 Pugh purchased his winning ticket at Sinclair, 5215 North 16th Street in Omaha. Scratching the ticket, he matched one of his numbers with a winning number for a corresponding prize of $15,000.

There were three $15,000 top prizes available in Dazzling 7s. Pugh was the third person to claim a top prize in the game.